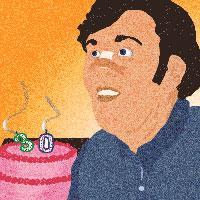 Some would say Cameron Dobbs is a loser who never gets a break. He’s turning 30 and all he wants is a quiet birthday dinner with his brother, Owen, and sister-in-law, Abby.  Unfortunately, they have different plans.  Unknown to Cameron, Abby has decided to fix him up with her friend, Natalie, and Owen has invited their loving but neurotic mother, Helen. Cameron is not thrilled by these surprise guests, and to add to his chagrin, the dinner menu is a list of food to which he is allergic.  After an unenthusiastic introduction, Natalie convinces Cameron to leave the dinner party and celebrate with her.  As his family awaits his return, Cameron begins the journey toward recreating his life and embracing manhood.