The Ruby Sunrise by Rinne Groff 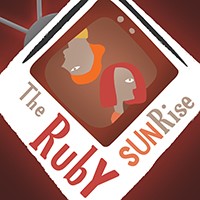 Illuminating two fascinating moments in America’s cultural and political history the play sets off from a farm in Indiana in 1937, as a young girl named Ruby struggles to turn her dream of the first all-electrical television system into a reality. Move to 1957, to a McCarthy-era New York TV studio as Lulu, Ruby’s daughter, attempts to get her mother’s story told through the medium of television. Groff’s script is filled with humor and irony as the story charts the course of the phenomenon of television: from early idealism and sparks of genius, to promises fulfilled and compromises brokered, and beyond.