Lend Me a Tenor by Ken Ludwig 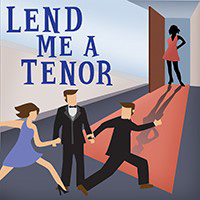 It’s 1934 and Saunders, the general manager of the Cleveland Grand Opera Company, is primed to welcome world famous, Tito Morelli, Il Stupendo, the greatest tenor of his generation, to appear for one night only as Otello. The star arrives late and, through a hilarious series of mishaps, is given a double dose of tranquilizers and passes out, is he dead? Will crisis be averted with a substitute? Will the audience be fooled? Not likely! A sensation on Broadway and in London’s West End, Ken Ludwig’s Tony Award winning, madcap comedy is guaranteed to leave audiences teary-eyed with laughter.